A place for everything (ok, a place for some things...)

Phew! Monday is finally over - the bad part anyway, now I'm home I can do whatever I jolly well please! I'm not a Monday fan as it signals 5 days of work but I'm only in for 4 this week so already it's feeling like a Tuesday :-) I haven't been very hooky or knitty today. Usually I get to knit at lunch but I was quite rushed today and had a meeting this afternoon so I'm going to get down to something yarn related very soon...

First though I want to show you what I was upto this weekend. A colleague from where I used to work got in touch asking if anyone I knew could donate raffle prizes to a charity fundraiser he's organising. Apart from a load of junk in my flat I really don't have much to giveaway (that would be wanted!) but I can make things :-D After a few messages back and forth we settled on some heart shaped door hangers. At first I was going to crochet them but realistically this would have taken a lot longer than just sewing them so I grabbed my trusty Brother machine and off I went! 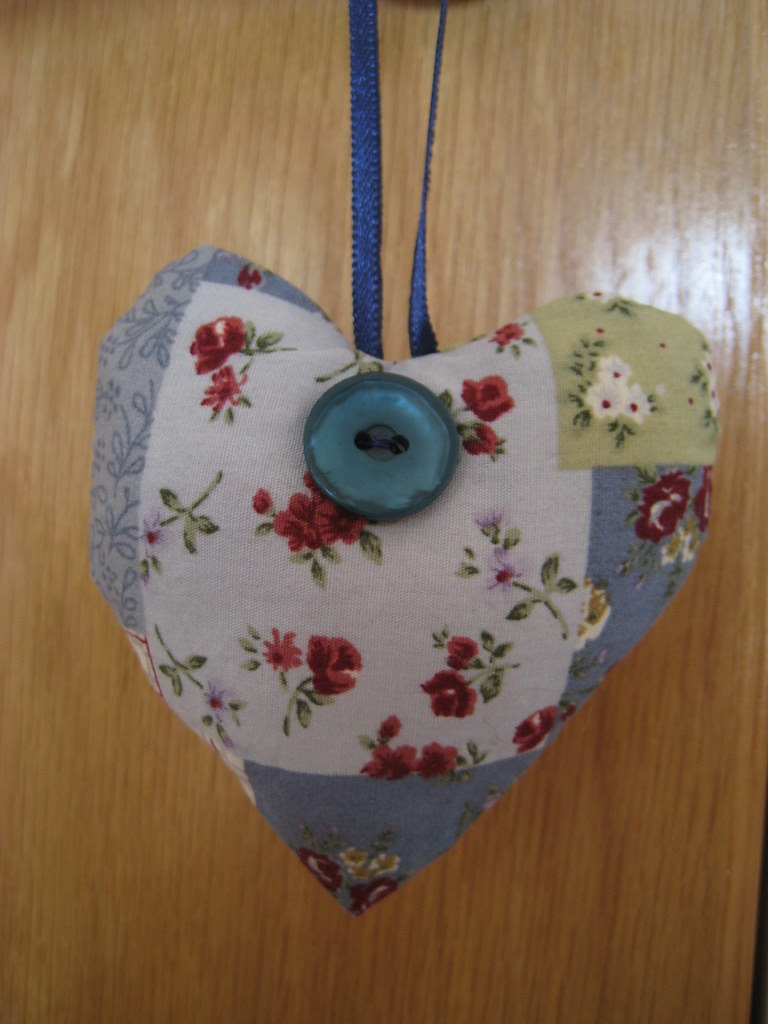 I'm not mad mad mad on them (although I love the idea) because they're a bit of a weird shape in my opinion! They went a bit pointy around the tops even though I was quite careful when sewing, but they are ok and hopefully they'll make a nice prize. 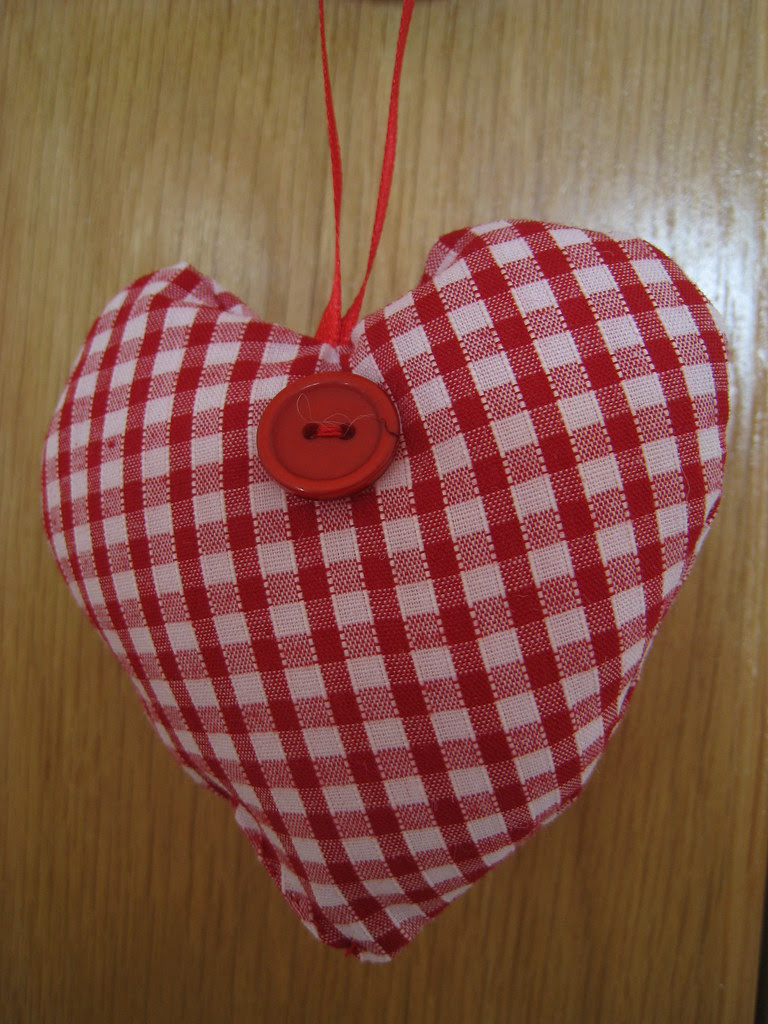 They're pretty easy to make by the way, if you wanted to give it a go.

1. Just sew two heart shapes together (right sides facing) making sure you poke some ribbon out of the top (you want the loop between the two sides).

2. Leave a gap big enough to turn the right way round and stuff. I sprayed my filling with a little peppermint oil to give it a nice smell, you could put lavender in or anything you like. See, just two steps ;-)

That wasn't what I wanted to show you though, oh no!

You see I've been experimenting with button holes... (possibly the most exciting setting on my sewing machine - it just does it for you!!!) 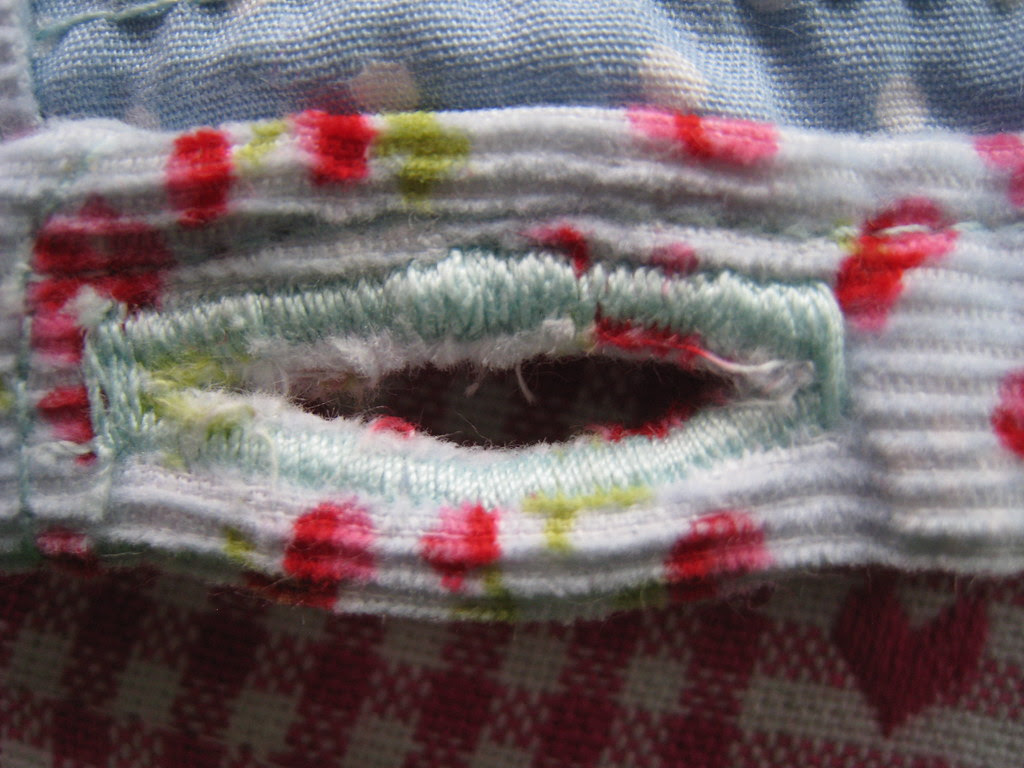 And digging out pretty buttons from my tins... 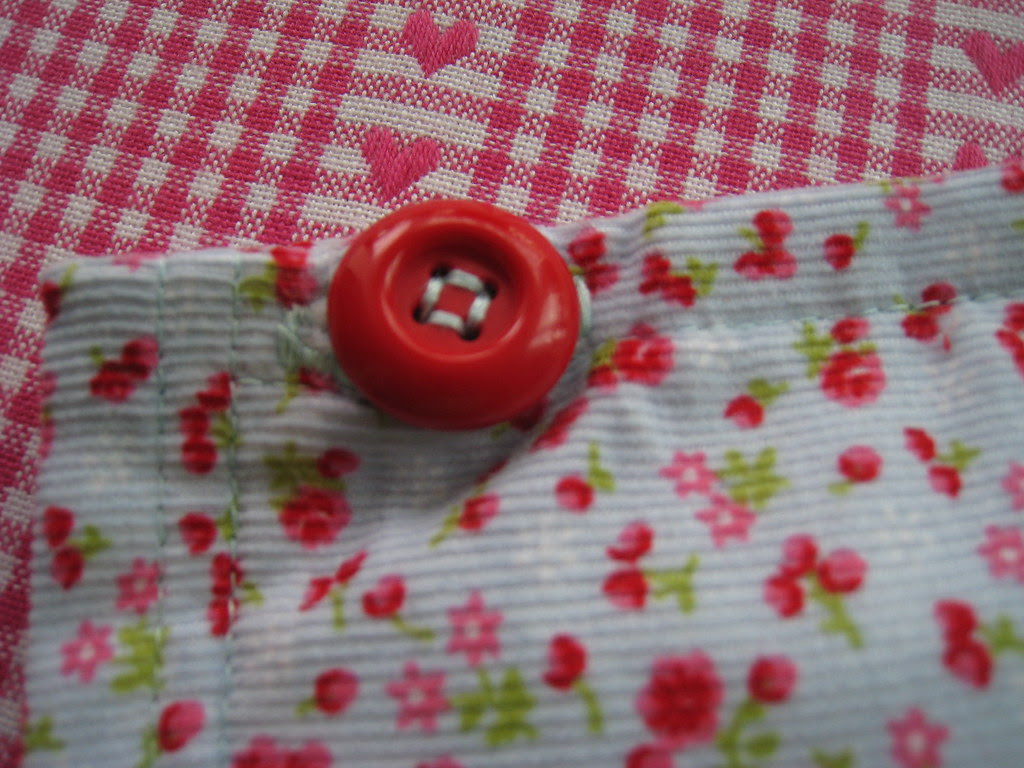 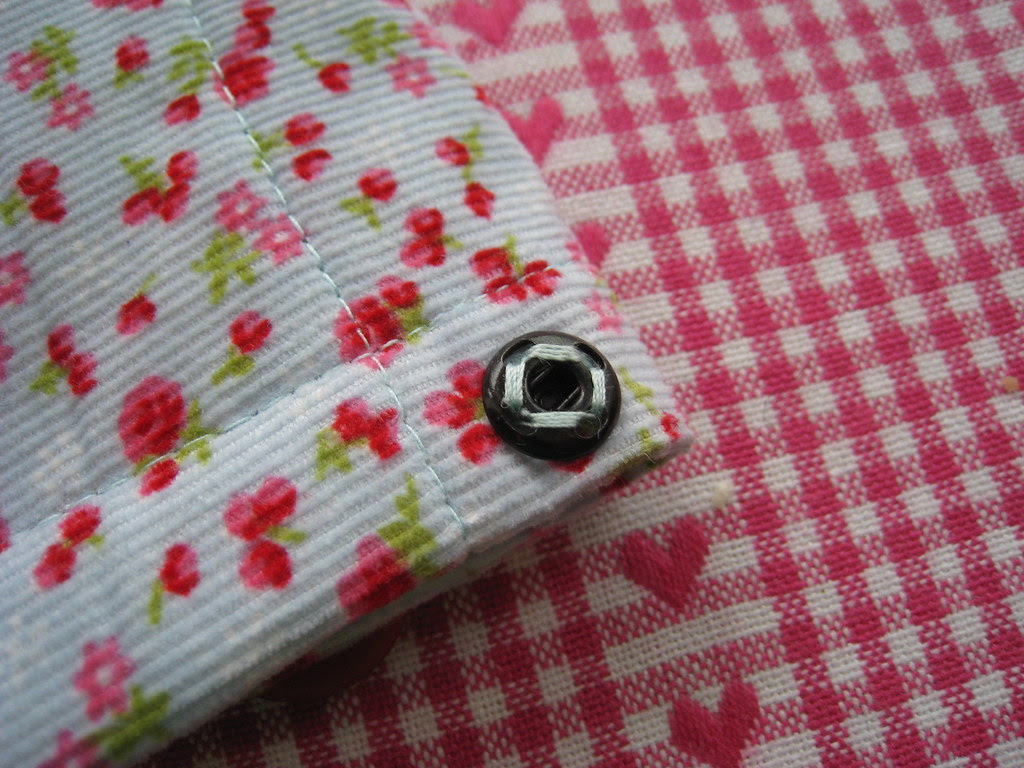 Ta-dah!!! My brand new knitting needle / crochet hook roll. I LOVE it!! I already have one I admit, I made it years ago back here but you can tell it was pretty basic and there are nowhere near enough places for all the hooks and needles I have now! 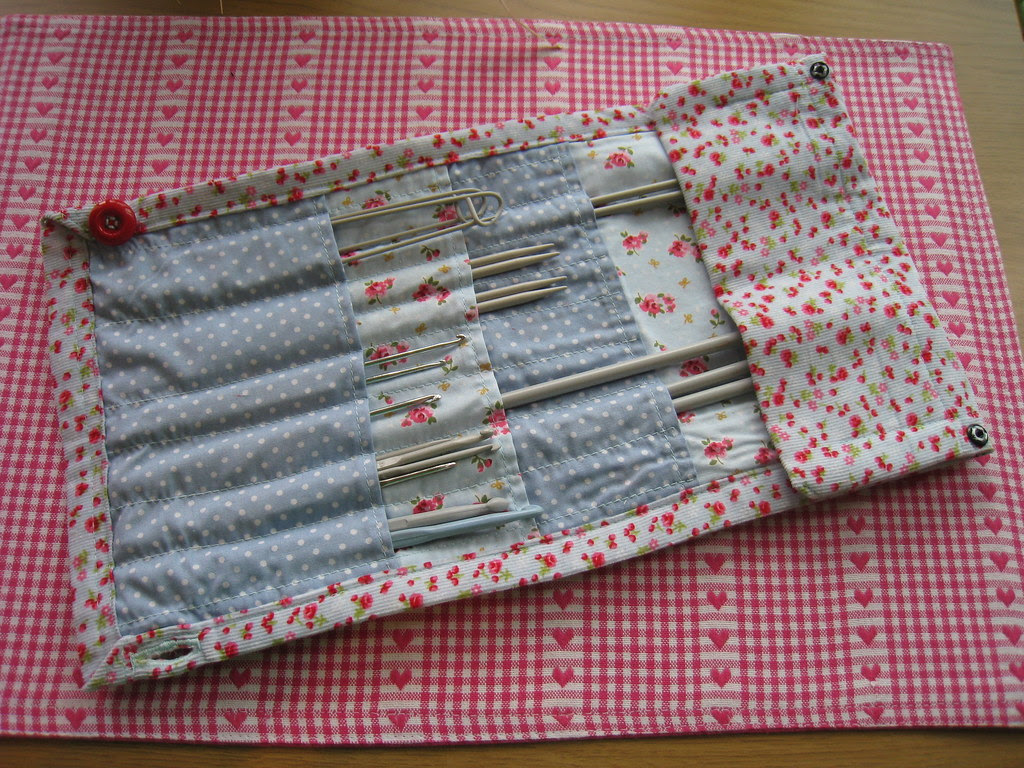 Not to mention that everything kept falling out of it... 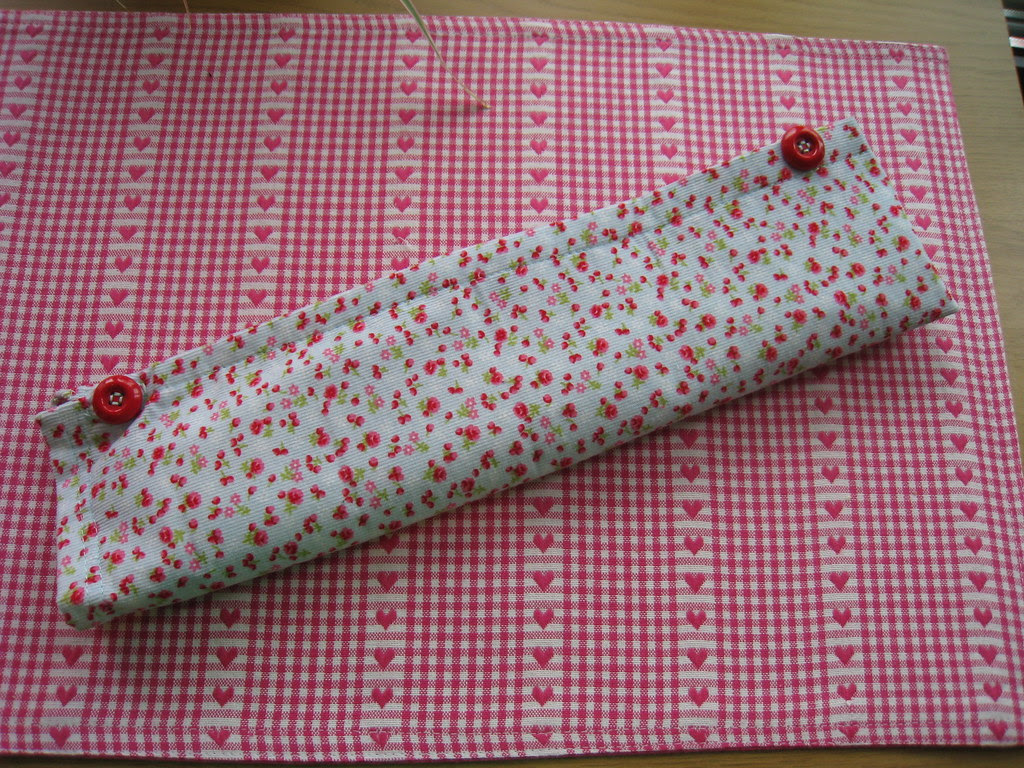 Now there are spaces for my DPNs (ok, never used them...!) and my growing hook farm! 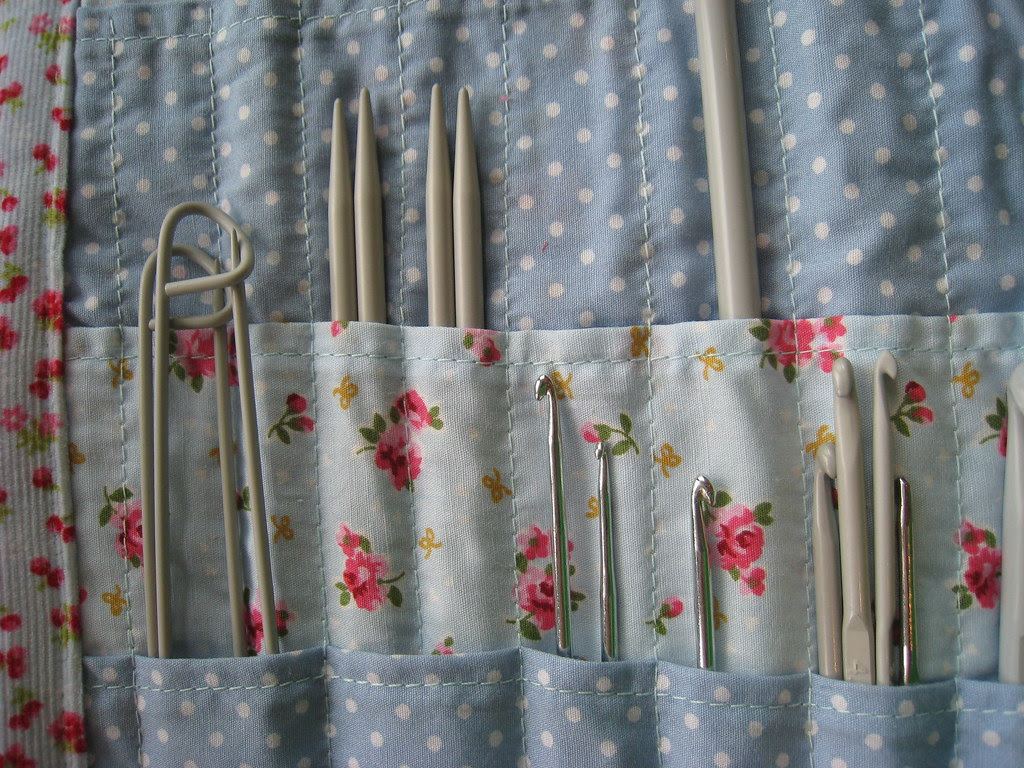 Many places for needles old and future! 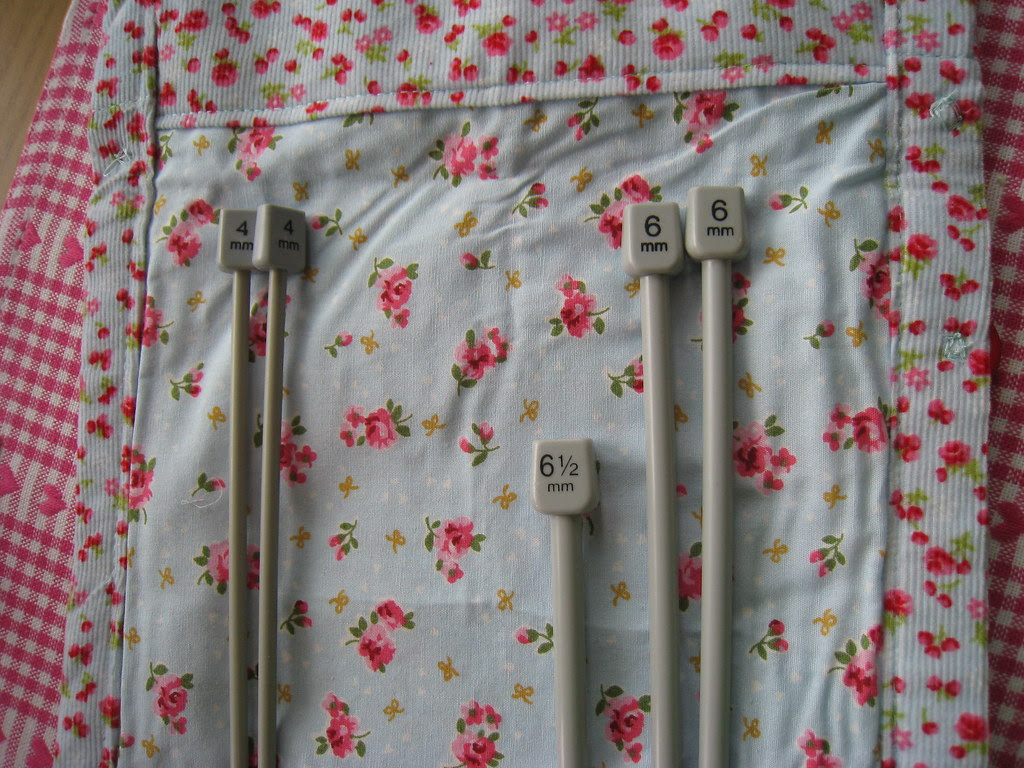 And the little flap keeps everyhing (well almost everything) secure 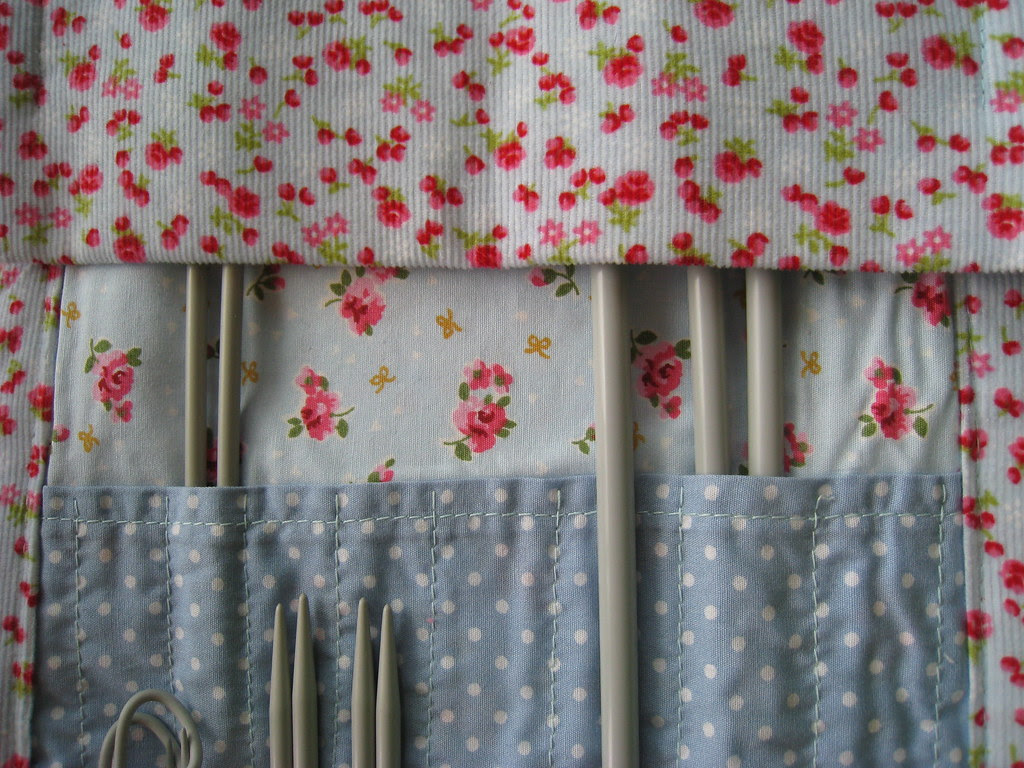 If I'd given it more thought I might have made little flaps for all the hooks as they can (and do) still fall out. I didn't really plan how I was going to put it together and kinda made it up as I went along (which is why the last one needed replacing!) but I'm actually pretty happy and I think it will serve its purpose well enough.

The fabric is all from Leon's in Chorlton, Manchester - I'm going to have to get you guys a photo if they'll let me it's simply amazing! Every time I go in I find something new and beautiful, sometimes it even ends up coming home with me!

Ok knitting time now, I need to get a few more pieces made so I can show you and get your opinion as I've hit a bit of a creative block!