I've re-written the start of this post about 12 times, I don't know what's wrong with my brain!  What it's trying to say through the medium of blogging is I went to the Manchester Art Gallery on Sunday with J.  He's not really into art and I'm also not interested in portraits or pottery or anything like that, but they had a very nice (free) exhibition on called The First Cut, which is a collection of work from artists who use paper as their medium, not painting or drawing on paper, but actually using the paper as the piece itself. 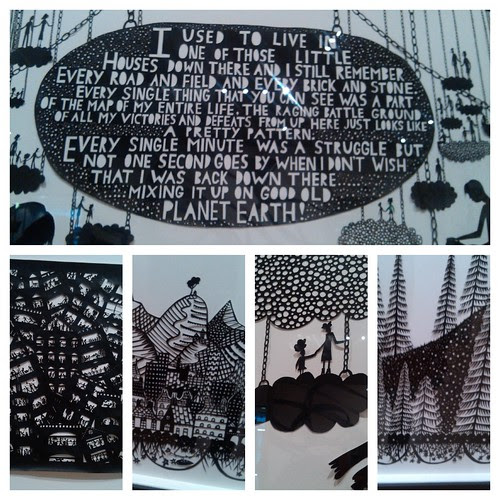 Some of the hand cut pieces are simply incredible, they must have taken hours upon hours upon hours to finish which is one of the reasons they are by far my favourite pieces, there's always something new to spot with all the detail involved. 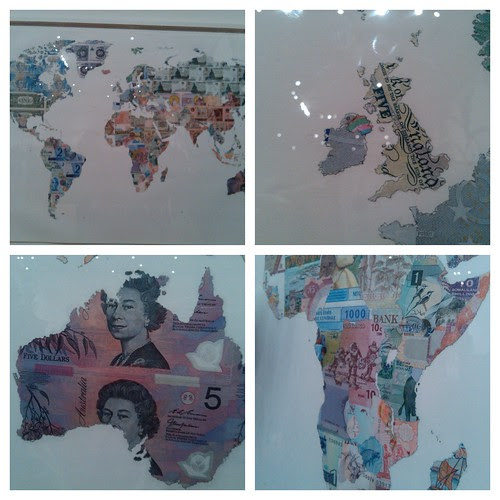 I thought this was very clever, a map of the world according to the currency they use.  Nothing political or religious about it, just straightforward fact.  You also get a sense of quite how massive Russia actually is, in case you'd forgotten! 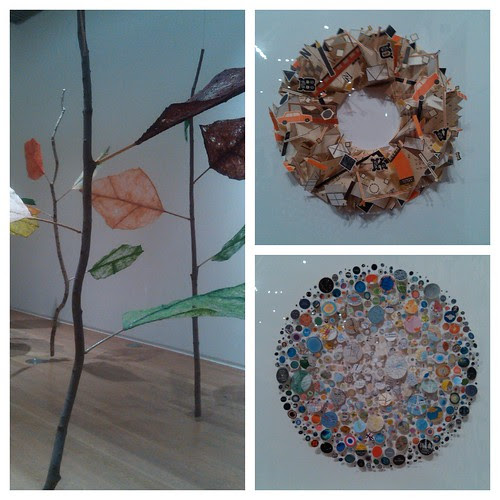 There were some nice trees you could wander about in, and some paper wreaths - ok not actually wreaths, but would look very cool on my door! 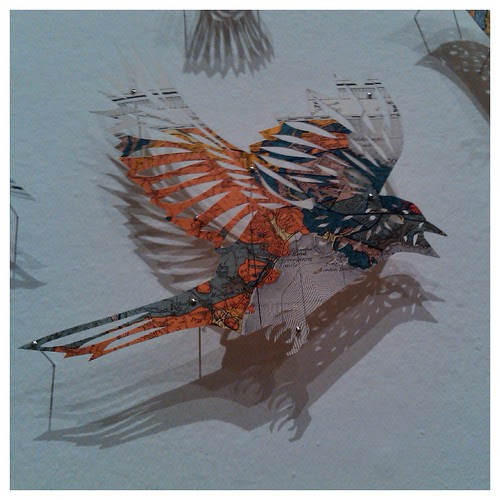 Some more cut birds, shoddily photographed on my phone. 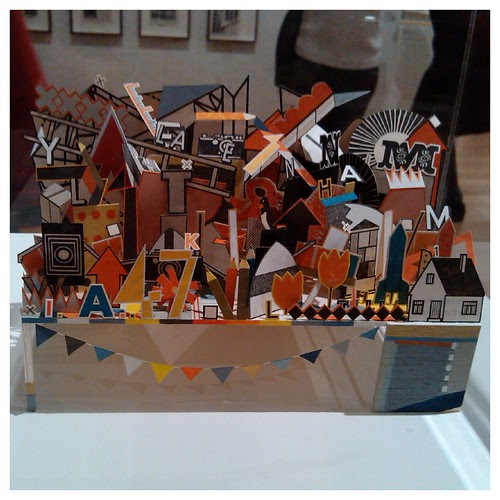 And then this cool little thing with bunting!  I really love the little pencils and tulips, I notice something new every time I have a look.

So while I don't have the time or patients to be quite as creative as these clever people, telling you about our trip does lead nicely into showing you some of the paper crafting I did over Christmas :) 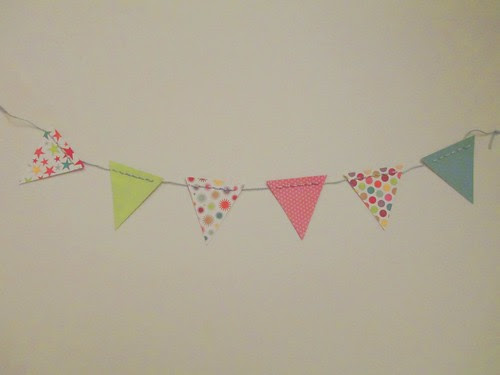 Now alas I have quite bad pictures, but I can't seem to get them any better so you'll have to bear with...  My mum & dad got me a big book of scrap booking type paper when we were over in New York so I made some tiny bunting that now adorns the shelves.

Notice the empty picture frame, I got that as a present last last Christmas...... 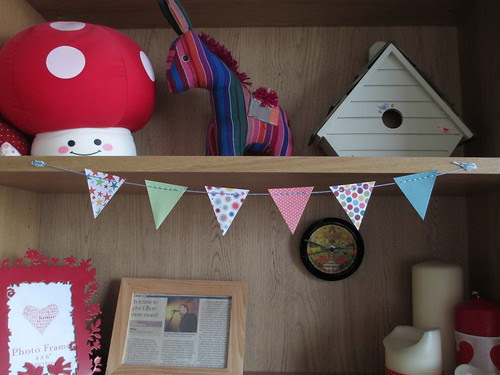 It was nice to have something to put up after Christmas, probably why I haven't felt so dull or glum this January!

They're pretty easy to make, it's a folded piece of paper so there's no back so to speak.  My mums got these weird little punch things; you roll it across the paper (with a foam board underneath) and it punches holes in different patterns.  Amazing!  I opted for a simple line so I could do running stitch, I've since discovered she's got one that makes holes for blanket stitch... 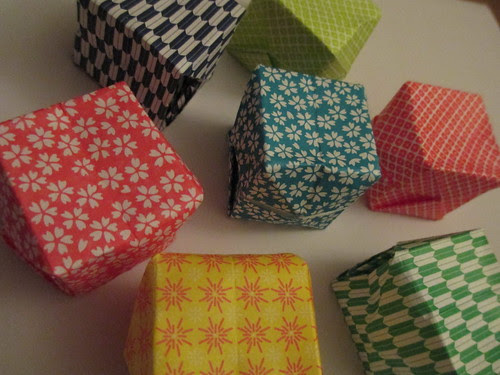 I also dug out one of my mums crafting books and found an origami tutorial to make lanterns.  Unfortunately they didn't work with my paper (and it meant cutting it into squares) so I had to drag everyone to Hobbycraft, which was a real shame. 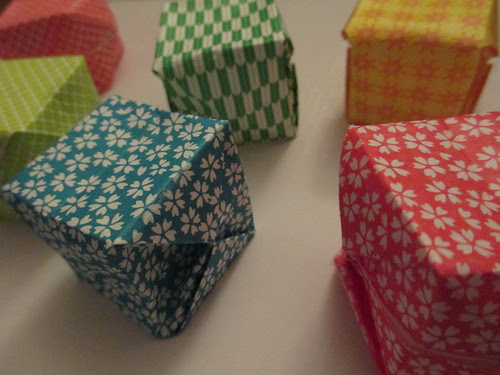 Origami paper in hand, I made lanterns. Ta-dah! 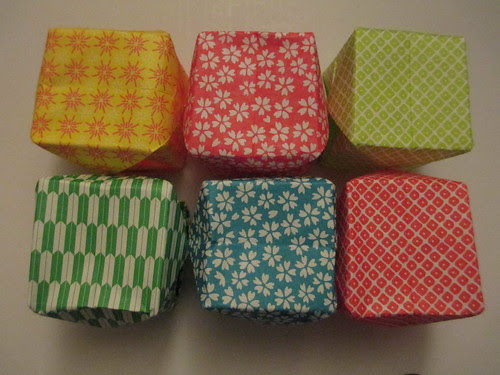 I have more to make, and then they'll go on some battery fairy lights o brighten the place because that's what we need J, more stuff!!

I've made some decent progress on my Nan's chair throw but still need to photograph that, and I've started a new snood for a friends mum, so lots of things to come soon hopefully, and to show you the needles I got for Christmas :o  They are to die for!!!

Thanks for stopping by, as always your reading, comments or whatever you do gives me that nice warm fuzzy feeling.

Much love from me 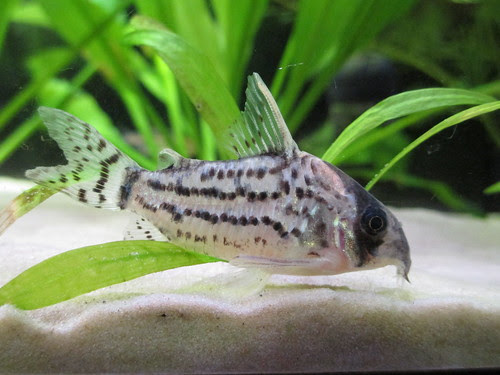